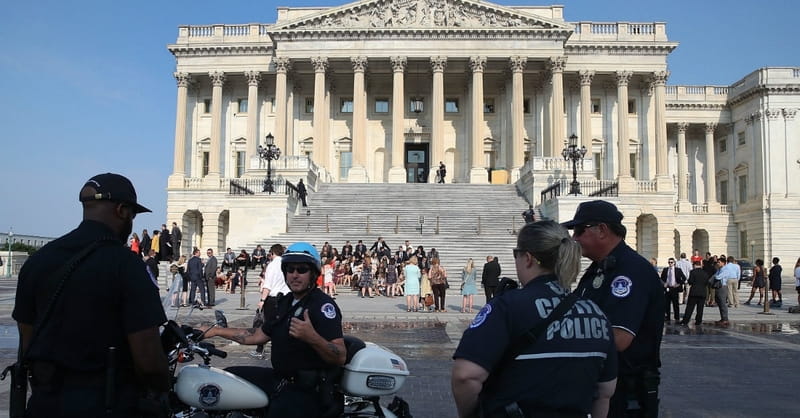 A leading GOP lawmaker has been shot in Alexandria, Virginia this morning while he was attending a practice for the GOP congressional baseball team.

According to FoxNews.com, House Majority Whip Steve Scalise, a Representative from Louisiana, suffered a gunshot wound in his hip. Several congressional aides were also injured.

CNN.com reports that Capitol Hill police prevented the attack from being what Kentucky Sen. Rand Paul said “would have been a massacre.”

"Nobody would have survived without the Capitol Hill police," Paul continued, in an interview with CNN.

Authorities are calling the incident a “deliberate attack” and police have the shooter in custody.

Another GOP Senator, Jeff Flake (R-AZ) who was present at the baseball practice, recalled that a massive amount of gunfire was exchanged.

"50 (shots) would be an understatement, I'm quite sure," said Flake.

Flake and Rep. Brad Wenstrup, who is a physician, attended to Scalise who was lying on the ground after the shooting. They were able to staunch the wound.

President Trump stated in the wake of the shooting that he and Vice President Pence are monitoring the situation and send their thoughts and prayers to Scalise.

"The Vice President and I are aware of the shooting incident in Virginia and are monitoring developments closely," said the President. "We are deeply saddened by this tragedy. Our thoughts and prayers are with the members of Congress, their staffs, Capitol Police, first responders, and all others affected."

Scalise is reportedly in stable condition and is currently undergoing surgery.

Photo:  U.S. Capitol Police stand guard in front of the U.S. Capitol Building, on June 14, 2017 in Washington, DC. This morning House Majority Whip Steve Scalise (R-LA) and others were shot by a gunman during Congressional baseball practice in Alexandria, Virginia.