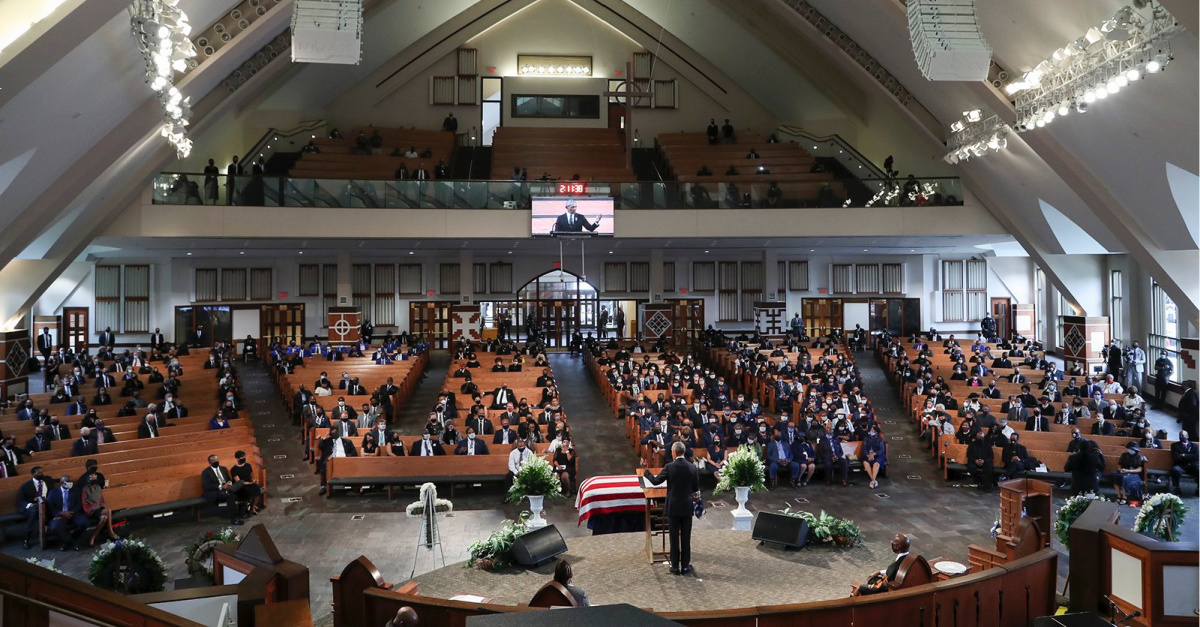 (RNS) — Church bells and shofars sounded across the country as a group of family and friends — a reduced crowd due to the coronavirus pandemic — gathered Thursday (July 30) to remember Rep. John Lewis at his funeral service at his home church, Ebenezer Baptist Church in Atlanta.

The civil rights leader’s life was marked by his deep Christian faith.

He famously preached to his family’s chickens as a boy, before being ordained a Baptist minister when still a young man, and was the youngest speaker at the March on Washington alongside the Rev. Dr. Martin Luther King. Lewis' beliefs motivated him to march across the Edmund Pettus Bridge in Selma, Alabama, where he was badly beaten by police for the right of African Americans to vote, a cause he later took up as a congressman.

And so it was fitting that his funeral was marked by powerful moments of faith.

The service was led by the Rev. Raphael Warnock, King's successor as pastor of Ebenezer Baptist, and included messages by the Rev. James Lawson, members of Lewis' family, his congressional staff, three U.S. presidents and Speaker of the House Nancy Pelosi.

They all spoke from Ebenezer's pulpit in praise of a man whom Warnock described as "a living, walking sermon about truth-telling and justice-making, and he loved America until America learned how to love him back."

Ebenezer Baptist wasn’t the only house of worship to remember Lewis on Thursday. More than 500 churches across the United States agreed to ring their bells during the funeral Thursday in memory of the congressman.

Many congregations without bells held a moment of silence or remembered Lewis on their signs instead. Some Jewish congregations joined by blowing a shofar.

The remembrance was part of an effort called Ring the Bells for John Lewis organized by Joshua DuBois of Values Partnerships in partnership with Lewis’ family.

2. An invocation for a ‘nonviolent warrior’

The Rev. Dr. Bernice King delivered the invocation at what she called “the homegoing of your son and servant, Congressman John Robert Lewis.”

King asked for comfort and peace for the family of Lewis, a “nonviolent warrior.”

She also cited Elisha’s request in the Second Book of Kings when the prophet Elijah was taken into heaven. Elisha asked for a “double portion of Elijah’s anointing,” she said.

“Let a double portion of what John Lewis’ life was about fall on us in this hour so that we can continue to get in good trouble,” King said.

“James wrote to the believers,” former President Barack Obama opened his eulogy of Lewis, sounding as if he were beginning a sermon of his own.

Obama then quoted the New Testament's Letter of James: "Consider it pure joy, my brothers and sisters, whenever you face trials of many kinds, because you know that the testing of your faith produces perseverance. Let perseverance finish its work so that you may be mature and complete, lacking nothing."

The former president described Lewis as “a man of pure joy and unbreakable perseverance,” a scriptural theme he would return to throughout his message.

He also described Lewis as a prophet.

“Like John the Baptist preparing the way, like those Old Testament prophets speaking truth to kings, John Lewis did not hesitate and he kept on, getting on board buses and sitting at bus counters, got his mugshot taken again and again, marched again and again on a mission to change America,” Obama said.

Lewis was remembered by not one, but three former presidents. Presidents George W. Bush and Bill Clinton also delivered brief remarks, as well as Speaker of the House Nancy Pelosi.

President Donald Trump did not attend the funeral.

4. Remembered as an ‘American saint’

President George W. Bush told the well-worn story of a young John Lewis preaching to the chickens on his family’s farm — even refusing to eat “one of his flock,” which he called Lewis' first act of nonviolent protest.

And, he said, it wasn’t just the chickens who got gospel lessons from Lewis.

Lewis was always “preaching the gospel, in word and in deed, insisting that hate and fear had to be answered with love and hope,” according to Bush.

The former president, a Republican, noted he sometimes disagreed with Lewis, a Democrat, calling that “evidence of democracy in action.” But, in his remarks, he emphasized the beliefs they shared.

“He’s been called an American saint, a believer willing to give up everything, even life itself, to bear witness to the truth that drove him all his life. That we could build a world of peace and justice, harmony and dignity and love. And the first crucial step on that journey was the recognition that all people are born in the image of God and carry a spark of the divine in them.”

Gospel music served as the soundtrack to Lewis’ funeral, including renditions of "Only What You Do for Christ Will Last" by Jennifer Holliday and "If I Can Help Somebody" by Kathleen Bertrand.

The song included the lyrics: “He was willing to fight for the struggle and willing to get in good trouble.”

Marvin Winans, pastor at Perfecting Church in Detroit, shared that he, BeBe Winans and their sister CeCe Winans had the opportunity to sing for Lewis before he passed. As they sang the hymn “We Shall Overcome,” he said, Lewis opened his eyes, recognizing the song that “led and was at the heart of those marches.”