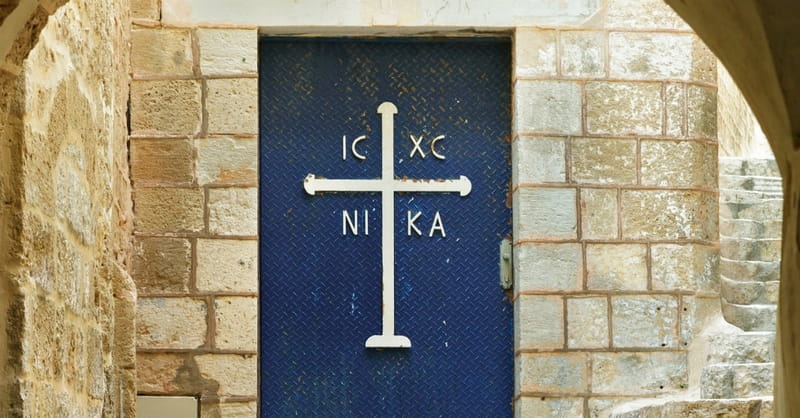 Smiling as he sings, Pastor Danny Awad faces his flock with eyes closed and palms turned skyward. The 30 or so worshippers scattered across two narrow rows of benches clap or sing along as the synthetic drone of an electric keyboard hums out a song of praise.

“Hallelujah!”Awad says, still smiling, as the song comes to an end. He rests his hands on the lectern, looking comfortable in front of the wooden cross that stretches floor-to-ceiling on the wall behind him. He motions for the others to be seated and prepares to deliver his sermon.

At first glance, this airy little church, modestly decorated with artificial flowers and faded posters of New Testament verses, could be any evangelical gathering from Topeka to Texas. Sunday morning hymns spill out its open windows into the small pasture outside. One detail sets this small community of believers apart, however, and has made it something of an apostate within the global evangelical community: the Palestinian flag that hangs prominently from the pulpit.

This is not the heartland, but the Holy Land. The Baraka Bible Presbyterian Church, led by Awad, sits off the main road in the West Bank village of Beit Sahour, near Bethlehem. It’s an evangelical church that is proudly, defiantly Palestinian.

In the context of the Middle East, where “evangelical” has become political shorthand for conservative Western Christians with a distinctly pro-Israel orientation, the idea of a Palestinian evangelical can seem like a contradiction in terms.

Time and again, the Baraka Church has found itself caught in the conflict inherent in that moniker. The congregation broke off from its parent organization, the Bible Presbyterian Church, after a dispute over what Awad and others saw as the American church’s pro-Israel leanings.

The subsequent dispute over the church’s land has been fought in courthouses in three different countries. It has also turned off the spigots of funding that normally flow freely to other evangelical congregations in the Holy Land.

“The other evangelicals have pretty much forsaken us, for the most part,” says Awad.

Yet even as his congregation dwindles from hundreds down to fewer than 50, Awad has begun using his unique pulpit to try to insert his voice into the global evangelical landscape. He is convinced the tide is turning, and that he’ll be able to engage American evangelicals as the unlikeliest allies for the Palestinian cause.

For now, though, the thousands of evangelical tourists who come to the Holy Land mostly stay on the other side of the separation wall that runs through the heart of downtown Bethlehem. Some are bused through the checkpoint to visit the site of Jesus’ birth, but the practicing evangelicals of the West Bank are, for the most part, kept out of sight and out of mind.

While the travel restrictions imposed on Palestinians keep Awad from traveling to Jerusalem himself, he says he is dismayed by pictures he sees of evangelical tourists praying at the Western Wall.

“They go there to worship at the dead stones of the Jews,” Awad says. “But they ignore us: the living stone, the living body of Christ.”

And at the Baraka Church’s Sunday morning service, evidence of these efforts abounds. Scattered among the Palestinian worshippers are members of evangelical congregations in Nashville, Tenn.; Toronto; and New Jersey — easily identifiable by the black earpieces through which Danny Awad’s father translates the Arabic prayers into English. Special prayer books provide both English translation and transliteration of the Arabic so the North American guests can sing along. The service includes a popular American worship song, led by Awad’s 11-year-old nephew. The Americans sing along while the locals mostly clap their hands with the music.

Many visitors are surprised to find Christians practicing this kind of worship in the West Bank. Pastor Marty Duren of Nashville came to the Baraka Church with another American pastor who had developed a relationship with Awad.

“Palestinian Christians are just totally absent from American evangelical thought,” he says. “I can’t speak for everyone, but in my experience I think most don’t think about or know that there are Christians in the West Bank at all.”

It is a sentiment familiar to Awad.

“I ask people: Do you think Jesus was born in Bethlehem, Pennsylvania?” he says with a laugh.

Of course, support for and pilgrimage to the state of Israel by American evangelicals have to do with more than just ignorance of their co-religionists in the West Bank or contemporary politics. It is rooted in theology. Interpretations of Scripture taught throughout the evangelical world, such as dispensationalism and replacement theology, hold that the repatriation of Jews to the Holy Land is a necessary precursor to Armageddon and the Second Coming of Christ. The creation of the Jewish state, and especially Israel’s seemingly miraculous victory in the Six-Day War, seemed to many evangelicals to be the fulfillment of prophesy. The Second Coming, surely, must be right around the corner. While not all evangelicals are focused on eschatological belief, support for Israel became an increasingly central aspect of church culture. Many of the American Christian tourists to the Holy Land come not only to see the sites where history took place, but where they believe the End of Days will begin in the future.

For the Palestinian congregation of the Baraka Church, this question of theology is not simply a spiritual matter. Not only do congregants see it as providing justification for their displacement and oppression, it almost cost them their church.

Missionaries from an American denomination called Bible Presbyterian established the church in the 1940s during the period of British Mandate. They had a fair amount of success attracting Arab Catholic and Orthodox Christians to their Bible-centric approach to faith.

But in the decades after the creation of Israel, the American church’s growing embrace of the Jewish state opened a gulf between the parent church and its Palestinian members. An agreement was reached in which the Baraka Church would be run entirely by its local members with no interference from missionaries, but would continue to receive funding from the parent church in America.

This tentative truce was shattered in 2012 when the Bible Presbyterians attempted to sell off a large plot of the church’s land to a group that Baraka members say planned to annex the property to the neighboring Israeli settlement. The deal sparked protests and riots throughout Bethlehem.

For Awad and the members of the Baraka Church, this was the ultimate betrayal. They attempted to block the sale though legal action that spanned Israel, the United States and Sweden and is still in process. In response, the Bible Presbyterians cut off all funding to the Palestinian church. For a church with declining membership and few outside supporters, the funding cut has left the Baraka Church financially on the brink.

Danny Awad says his church is engaged in a decades-long battle with dispensationalism. But for a man at war, Awad is frequently willing to embrace his enemy. He often opens his pulpit to visiting pastors whose pro-Israel theological leanings he finds infuriating and personally hurtful. If they are willing to come to his church, he will have them.

On this Sunday, the guest preacher exemplifies how that strategy has borne fruit. Pastor Kevin Brown of the Perfecting Church in Sewell, N.J., was drawn to the clergy by a fascination with eschatology and the final fate of mankind. Raised with dispensationalist belief, Brown acknowledges that he still subscribes to a literal translation of Scripture pertaining to the end of days. But, he says, coming to the West Bank and experiencing Christian fellowship at the Baraka Church for the first time five years ago helped him re-examine his beliefs.

“Jesus is returning,” he says. “Other than that, I let go of the speculative theology that was dictating to me how I saw this part of the world.”

Brown now brings other American pastors to the West Bank in the hopes that their theological and political beliefs will gain nuance through interaction with the reality, and the Christians, on the ground. He says that Awad doesn’t try to directly counter guests’ beliefs. By giving up his pulpit he creates a connection between place and preacher that can’t be done any other way.

“When they’re preparing to present at that pulpit, it forces them to look at that part of the world in ways they never have and to interact with the text of the Bible in ways that they never have,” Brown says. “There’s no way that does not become in some way paradigm-shifting for them.”

Awad knows he’s not going to change everyone’s mind. He’s OK with that. He recently invited a guest preacher from the Southern Baptist Convention – a famously conservative and literalist branch of American evangelicalism. He has no illusions that the preacher left an outspoken advocate for the Palestinian people. But at least that preacher now knows that they exist — that he has brothers and sisters in Christ — invisible behind the wall.