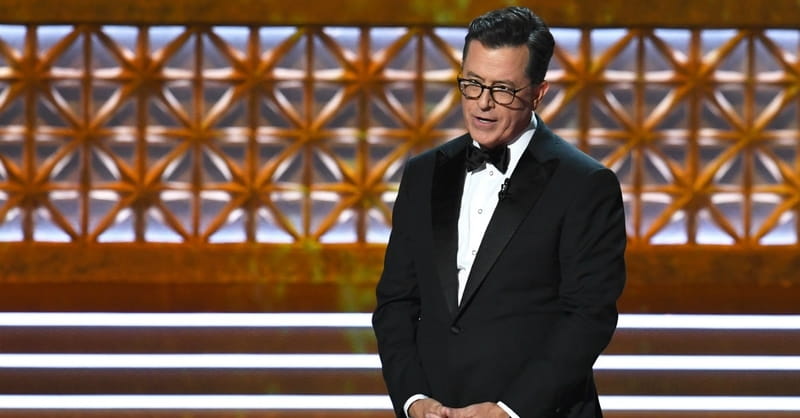 Award shows have a long history of political commentary, and the 69th Annual Primetime Emmy Awards proved no different. Host Stephen Colbert kicked off last night’s show with a rousing monologue which poked fun at Donald Trump while also praising the bravery of first responders to Hurricane Harvey and Irma. Later, the Late Night comedian took aim at Republican Senator Ted Cruz, remarking on the “staffing issue” which led the senator’s official Twitter account to like a pornographic video. The entire event was capped off by a surprise appearance from former White House spokesman Sean Spicer.

Colbert was hardly the only personality to get political though. According to The Hill, SNL actress Kate McKinnon gave emotional thanks to Hillary Clinton during her acceptance speech for “Outstanding Supporting Actress in a Comedy Series”. Meanwhile, Fox News reports that upon accepting his award for “Outstanding Supporting Actor in a Comedy”, Alec Baldwin took a quick jab at Donald Trump by stating,

"I suppose I should say at long last Mr. President, here is your Emmy."

The most direct critic of the night, however, would have to be actress Lily Tomlin, who bluntly called Trump a "sexist, egotistical, lying, hypocritical bigot” while presenting an award. The partisan climate could even be seen in the night’s winners, as politically-charged programs like Veep, The Handmaid’s Tale, and Saturday Night Live all took home major awards throughout the evening.