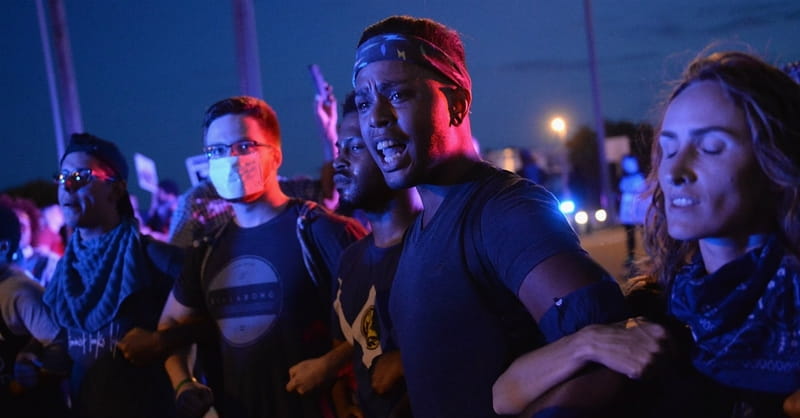 What began as a peaceful protest in downtown St. Louise ended in violence on Monday, when police officers in full riot gear detained roughly 80 people after a wave of property damage swept the city. According CBS News, the protests began on Friday when a judge ruled that 36-year-old Jason Stockley, a white former police officer, was not guilty in the 2011 shooting death of Anthony Lamar Smith, a black suspect. The ruling sparked massive outrage from the public and set off a large number of demonstrations throughout the weekend. From there, CBS writers,

“Hundreds of people marched through the streets of downtown, the posh Central West End, and the trendy Delmar Loop area of nearby University City. Protesters also marched through two shopping malls in a wealthy area of St. Louis County.”

“Sunday's protest began at the police headquarters downtown. Following the same sequence of events as in the previous days, well over 1,000 people marched peacefully for several hours.”

“By nightfall, most had gone home. The 100 or so demonstrators who remained grew increasingly agitated as they marched toward the core of downtown. Along the way, they began to knock over large planters, broke windows at a few shops and hotels, and scattered plastic chairs at an outdoor venue.”

Several police officers sustained minor injuries but are expected to return to duty soon. Mayor Lyda Krewson tweeted a message calling the vandalism “unacceptable”, while Democratic Rep. Michael Butler encouraged police to target the agitators while allowing others to continue demonstrating peacefully. Many have noted these protests are following a similar pattern borne out after the 2014 killing of Michael Brown in Ferguson. While the majority of protesters are non-violent, a subsection has emerged which continues to clash with local authorities.

Photo: Protestors demonstrate during a protest action following a not guilty verdict on September 15, 2017 in St. Louis, Missouri. Protests erupted today following the acquittal of former St. Louis police officer Jason Stockley, who was charged with first-degree murder last year in the shooting death of motorist Anthony Lamar Smith in 2011.