Despite Coronavirus, in Italy Communion Is Stronger than Quarantine 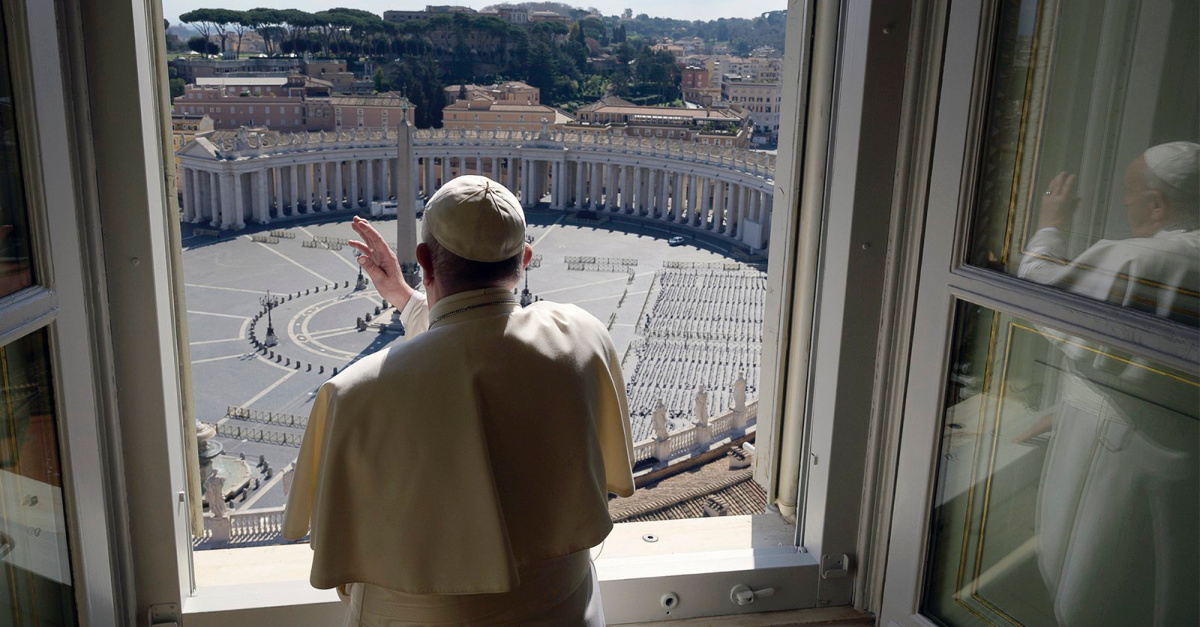 Despite Coronavirus, in Italy Communion Is Stronger than Quarantine

VATICAN CITY (RNS) — One week into quarantine, one might think that a certain loneliness and desperation would set in among Italians and — based solely on the numbers — that would make sense.

More than 2,150 people have already died. The pressure put on the hospitals has increased the mortality rate of the virus from 2% to 9%.

Despite the strict measures enacted by the Italian government, the country had its deadliest day on Sunday, with 368 deaths due to the coronavirus. That number has added to the fear in the hearts of many Italians who hoped that their quarantined isolation would already yield results.

The few times I left my home to go to the supermarket, I found a deserted city. Every store is closed, and the traffic lights blink without a purpose.

A sort of eerie silence is the only thing that fills the sidewalks, the grocery aisles and parks.

For a country that loves to kiss (both cheeks!), seeing people dodge each other at the supermarket to maintain the 3-foot safety distancing is a painful reminder of how much this pandemic has changed the face of Italy.

The modern forms of entertainment in our technological homes are not enough to satisfy our need to be with others. Walled up in our apartments, unable to embrace our loved ones or enjoy the simple pleasure of fresh air, one might think that restlessness, anxiety and depression would sink in.

One would be wrong.

While those feelings surely creep their way into our homes, Italians have found new forms of community and closeness that stretch far beyond the confines of our apartments.

During this week, I have spoken to more friends and family than I normally would on a given week before the pandemic.

Whether it's Skype chats with dozens of friends from all over Italy or text messages from people I haven’t heard from in years, this time alone has led us all to want to reconnect and to finally have the time to do that.

“The moment we are living now is one of great sadness, it’s a desert,” said Laura Biella, who lives in Milan, one of the cities hit the hardest by the coronavirus. She agreed to share her experiences of quarantined life with me via audio message on Friday (March 13).

“But it’s also true that in this moment we can experience a great communion through the small things of everyday life,” she said. “It’s discovering in the simplicity of daily tasks an enjoyment, a happiness and also sharing these things with others, mainly members of your family.”

Receiving the sacrament of Communion is the thing Biella misses the most in these times. This has led her to reflect more deeply on something she usually took for granted. Since most Masses have been banned in the country, Laura has found in the Rosary an experience of prayer and spirituality that doesn’t require her to leave the house.

“I miss experiencing the Mass within the Christian community that is made up of people who are special to me, not because they are better than others, but because we share the same love that I have for the Lord,” she said.

Another faithful Catholic from Milan, who signed herself P.S. in a letter she sent me on Friday (March 13), also said that she is “living this time with a bit of suffering” not being able to have access to the sacraments, but is finding solace in other moments.

She and others in her community pray the Rosary together via cellphone, and the chat created by her parish “has become a reference point to feel closer with each other.”

Every day her parish priest sends passages from the Gospel or reflections on the group chat.

“This initiative by our (priest), along with the streaming of the Sunday Mass he celebrates, is exalting the feeling of belonging to the Christian community. We all feel concretely together and in communion despite the distance,” she said.

“We are all profoundly grateful and feel a deep emotion that, I believe, is making us even closer than before.”

Several priests throughout the country are looking for ways to maintain a sense of community. Not too far from Milan, Don Giuseppe Corbari has taped selfies sent by faithful to the empty pews of his church of Saint Quirico and Giulitta in Robbiano where he continues to say Mass via streaming.

For the past three days now, my entire neighborhood has emerged from balconies and windows to sing together. People I have never spoken to before now greet me every day at six in the evening.

A nice man across the street takes out his guitar and, with typical Roman charisma, leads us into song.

On Sunday, we sang “Brother Sun, Sister Moon” from St. Francis’ Canticle of the Creatures with the presence of our local pastor. Some women joined their hands in prayer while others waved Italian and Roman flags.

It’s hard not to be touched by the joined voices of strangers booming throughout the city as if to say, “We are here! Don’t lose hope.”

Every day we close with the Italian national anthem: “Let us unite! We are ready to die; Italy called,” are the words of the chorus, which rings powerfully when sung with conviction these days.

One might think that we would feel alone, but we don’t. A delegation of Chinese medical experts and scientists came to Italy on Friday “to exchange the help” that was sent in the early days of the coronavirus outbreak.

In a time when Europe seems despondent, the Chinese were greeted with the enthusiasm shown to the elves in the battle of Helm’s Deep in "The Lord of the Rings."

Pope Francis left his apartment inside the Vatican on Sunday to visit Via del Corso, one of Rome’s main arteries, and pray in the church of St. Marcello al Corso before the miraculous cross, which was led throughout the city in 1522 to cast away the great plague.

“In this time of pandemic, where we find ourselves to live more or less isolated, we are invited to rediscover and deepen the value of communion which unites all members of the Church,” Francis said during his Angelus prayer on Sunday before an empty square and millions watching from home.

“United with Christ we are never alone, but we form a single Body, of which He is the Head,” he said.