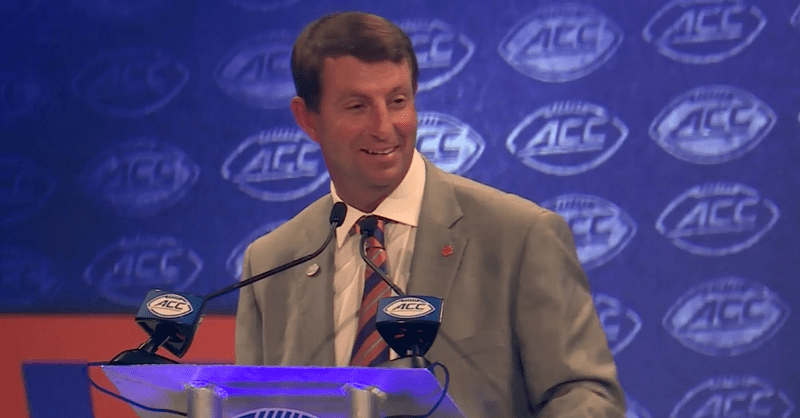 Clemson’s football coach, Dabo Swinney was recently interviewed during the ACC kickoff. Instead of the usual questions about the team or the upcoming season, he was, instead, asked about his faith.

“Man, that’s the easiest question I’ve had all day,” Swinney commented. Enthusiastically, he responded, recounting his childhood, being raised by parents who taught him there was a God, and later, coming to Christ at the age of sixteen: “And that was a game-changer for me,” he said, “That’s really become the foundation of my life.”

Swinney continued, “It’s hard to survive and thrive in this world if you don’t have a spiritual foundation and have something that that you know, [sic] will give you peace, because life is hard. And we’re all going to experience death and failure and setbacks and disappointments and cancer and, you know, [sic] it’s a really difficult world. And, for me, God has always--in my relationship with Christ--he’s given me hope and peace.”

Swinney also shared his life verse, Jeremiah 29:11, saying that he applied it to his life’s journey and though he is now the head coach of Clemson’s football program, that his “life hasn’t always been this way”:

“I’ve always used that as, to me, if there’s really hope in the future, then there’s power in the present to deal with whatever mess you’re dealing with in your life. You know, to step through, to hang in there, to persevere, to continue to believe in something. And that’s what [sic] my relationship with Christ did for me. It gave me a hope and a belief—the ability to have a hope and a belief beyond my circumstances.”

Referring to his greatest accomplishment, Swinney also surprised, saying it is his three sons’ profession of faith in Jesus Christ and that it is a personal decision.

Swinney concludes, “…trust me, the people that know me know I ain’t perfect, but I do try to live my life in a way, that hopefully, can be pleasing to my maker. Because I know I’m going to meet him one day. And he’s not going to pat me on the back, talking about how many wins I had, how many coach of the year trophies we got, or how much money I made. He’s, I really think he’s gonna hold me accountable to, you know, how I took advantage of the opportunity and the blessings that he gave me, the impact that I had on young people, the type of men that we develop through a game.”