Cathedral at Nantes Is Targeted by Arsonist, French Catholics Fear Their Religion Is under Attack 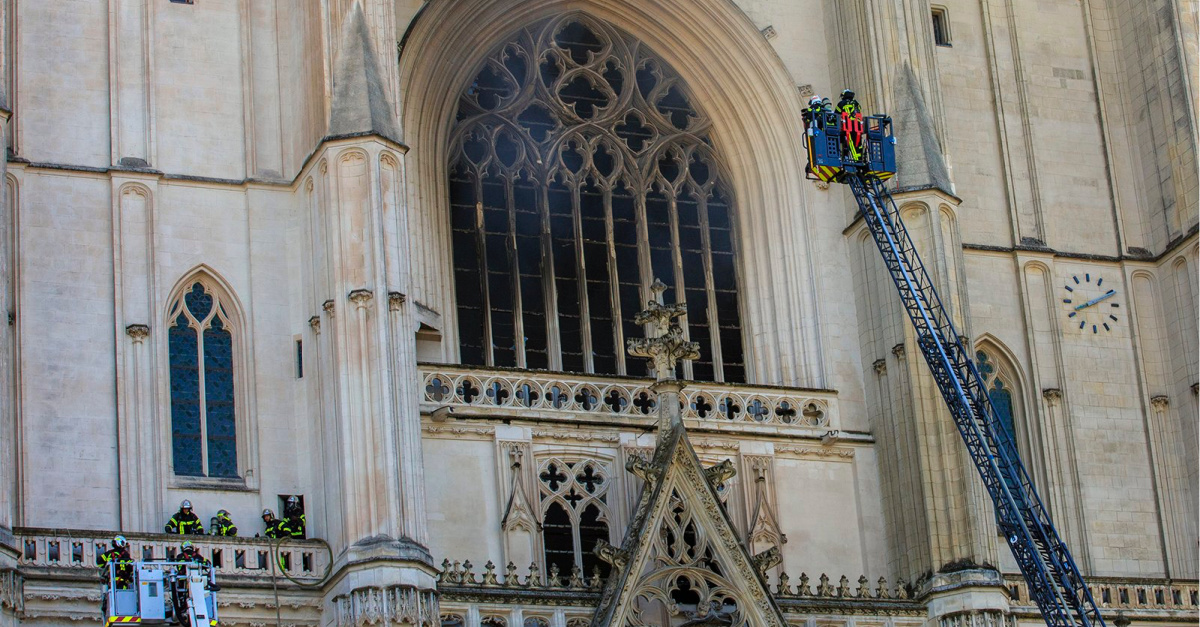 Cathedral at Nantes Is Targeted by Arsonist, French Catholics Fear Their Religion Is under Attack

VATICAN CITY (RNS) – For French Catholics, the recent fire at the cathedral of Nantes is yet another sign that their religion is in danger.

Over the past week, they’ve felt both anger and profound sadness after seeing another beloved cathedral in flames, only to learn that the fire was deliberately set by one of their own.

A volunteer who worked as an altar server at the Cathedral of St. Peter and St. Paul in Nantes, France, confessed on Sunday (July 26) to setting the fire that damaged stained-glass windows of the historic Gothic church.

“We are split by contradictory feelings: stupor, incomprehension, anger towards a man who has abused the trust which was placed in him; but also compassion for this man who made this crazy gesture,” read a statement by the Diocese of Nantes published on its website on Tuesday.

The fire at the medieval church came only 15 months after an accidental blaze destroyed the vault and spire of the Notre Dame Cathedral in Paris during Holy Week.

For some Catholics, the fire at Nantes is yet another heavy blow to the shrinking community, but also a symbol of Catholicism becoming a minority religion in France.

While Catholics make up 41% of the French population, the number of practicing faithful may be as low as 5%.

And attacks on Christians have been on the rise in recent years.

In 2019 there were 1,052 anti-Christian hate crimes in France, which is almost twice the amount of cases of anti-Semitism and 10 times the number of anti-Muslim acts, according to data released annually by the French Ministry of the Interior.

“For French Catholics, it’s a new disaster,” he said. “We saw the cathedral of Nantes burning and we wonder what is the sign of the Lord for our church in France?” he said.

Sanson said he felt “personally affected by the disaster,” since he lived in Nantes for 15 years and his mother still lives in the city in the northwest of France.

He described the experience of living as a Catholic in France as being part of a minority that is “deeply split.” The church, he said, lacks strong and vocal leadership while facing “obstacles and hate.”

“Sometimes we feel like we are living Holy Saturday. It’s a big silence. We feel that Jesus has died and there is no hope,” he said, referring to the day on the Christian calendar between the crucifixion and the resurrection.

“Year after year we don’t feel at home in France,” he added.

Reaction on social media to the blaze was a mixed bag of comforting words and hate speech against Catholics.

Some tweets suggested that the blaze was a part of a conspiracy. Others were happy to see the cathedral in flames.

“There is a mix of sadness and anger. We feel it’s unfair, why all these attacks against Catholics?” he asked.

The online debate surrounding the blaze of the Nantes cathedral was exacerbated by the fact that the man who admitted to the crime was an asylum-seeker from Rwanda.

Immediately after the fire on July 18, French police began investigating possible arson. Since they found no evidence of a break-in, they took into custody a 39-year-old who worked as an altar server at the cathedral and was in charge of closing it after hours.

The man, identified only as Emmanuel, was immediately released, according to published reports.

Upon further questioning on Sunday, the suspect reportedly admitted to starting the fire. His lawyer told local media that his client was “consumed by remorse.”

The suspect, who is presumed innocent under French law, could face up to 10 years in prison and a fine of $175,000 for “destruction and damages caused by the fire” if convicted, according to the AFP news agency.

“We are not here to judge but to evangelize and be joyful,” Boutheon said, “I think that the best thing is to pray for this guy, to pray for his soul because he certainly feels very, very guilty.”

As in many other countries, debates surrounding immigration are high-strung in France. The Catholic Church, under the leadership of Pope Francis, has adopted a strong pro-immigration stance that has garnered both praise and scorn.

The Diocese of Nantes confirmed to RNS on Tuesday that it had helped the suspect apply for refugee status when he moved to France between three and four years ago and also helped him find a living accommodation in a home run by the Catholic community.

The diocese also stated that Emmanuel was a Catholic and a regular Mass-goer who was well accepted by the community.

“What reasons could have led him to commit this senseless act? It is up to Justice to establish it,” said the diocese in its statement.

“We are not taking the place of those charged with investigating and imposing a conviction. But we will ensure that the bruising suffered by our cathedral church is not added to that inflicted on the Church of Christ by hatred and denial of brotherhood.”

The reputation of the Catholic Church in France has also been tarnished by the sex-abuse scandals and cover-up involving several high-profile members of the clergy. The combination of these factors, in the context of the COVID-19 pandemic, which deeply affected religious congregations around the globe, has left French faithful feeling like “Catholicism and Christianity is softly disappearing.”

“Yes, we are not happy,” said Boutheon. “We are not here to worship and adore buildings. We need to read all these events with the light of faith.”