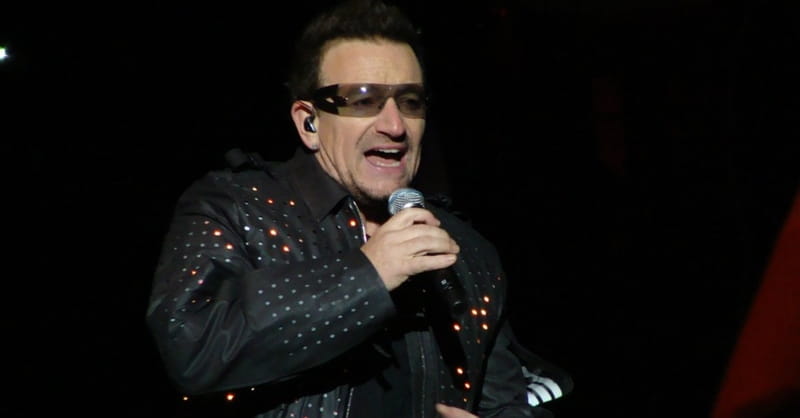 Bono and the entire U2 band recently performed a worshipful rendition of their popular song “I Still Haven’t Found What I’m Looking For” on Jimmy Kimmel Live.

Bono has spoken out about his Christian faith before and has been known to advocate for greater honesty in Christian music. Also, last year, the U2 frontman partnered with Eugene Peterson, the man behind The Message Bible translation to make a film about the Psalms.

Many of U2’s song lyrics are Christian-themed, including these lyrics from “I Still Haven’t Found What I’m Looking For.”

“I believe in the Kingdom Come/ Then all the colors will bleed into one/ Bleed into one/ But yes, I’m still running/ You broke the bonds/ And you loosed the chains/ Carried the cross of my shame/ Oh my shame, you know I believe it”

U2’s performance on Jimmy Kimmel turned into full-blown worship when Bono said, “Take you to church, Seleh,” and guest singers from the audience joined in, singing, “He will lift you higher and higher / He will lift you up when you call / He will bring you shelter from the storm.”

One commenter on the video of U2’s performance identified with the band’s lyrics: “Oh my heart... as a pastor I have found Christ, but I still haven't found what I'm looking for. May His Kingdom come. We will never be complete until we are living out the Kingdom of God here on earth.”