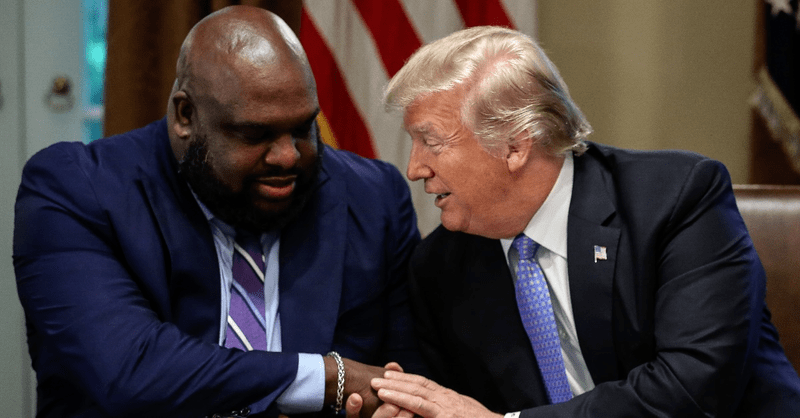 In early August, President Donald Trump invited a group of pastors to the White House to discuss prison and criminal justice reform. Trump sat at the table with a group of African American pastors for the meeting he called “President Trump Meets with Inner City Pastors.”

Among the pastors who attended the meeting was South Carolina pastor John Gray of the Relentless Church.

Gray opened the meeting in prayer saying, “God, we thank you for an opportunity to speak about the hearts of those who sometimes cannot fight for themselves.”

Gray continued, “We thank you for this moment to be able to share our hearts with the president. Dr. King said, ‘We cannot influence a table that we are not seated at,’ so we pray that this conversation will be fruitful and productive and honoring of the best traditions of this nation.”

According to Christianity Today, the pastors in attendance received mixed feelings from the press, their communities and congregations. While Fox 10 Phoenix described footage of Gray’s prayer as “POWERFUL,” a black ministers coalition described it as heartbreaking in an open letter to the pastors who attended the meeting.

In the letter the coalition of 50 ministers wrote, “We need not remind you of the posture of the Prince of Peace, our Savior from the streets, when He stood before Herod and Pilate. He didn’t even pray for them.”

Gray is the host of a popular TV show on the OWN Channel and is a trusted voice in the Christian community. Christianity Todayreports that, Gray typically kept his distance from politics, adding that his wife and others advised him not to go to the White House.

After the meeting at the White House Gray appeared on CNN Tonight with Don Lemon who said, “the President of the United Sates, this administration... they are using you as a prop and that it is a photo op.”

Gray continued, “I don’t agree with many of the policies, but it doesn’t stop me from having a conversation.

Purportedly the meeting was meant to be used to discuss a criminal justice reform bill, and Gray says that the bill might yet make it through Congress as a result of their combined efforts.

The bill proposes several provisions for inmates who are exiting the prison system, including incentives for inmates to undergo substance abuse counseling and job training before reentering society.

The FIRST STEP Act passed the House in May but never made it to the Senate floor. Christianity Todayreports that legislators are presently working to combine the FIRST STEP Act with the sentencing reform provisions from the Senate’s Sentencing Reform and Corrections Act.

Gray and other ministers say getting this bill across the finish line was their desired outcome from the White House meeting.

Among those in attendance were Alveda King, pro-life activist and the niece of Martin Luther King Jr., Darrell Scott, the pastor of New Spirit Revival Center in Ohio, and Harry Jackson from Maryland. All three are longtime supporters of President Trump.