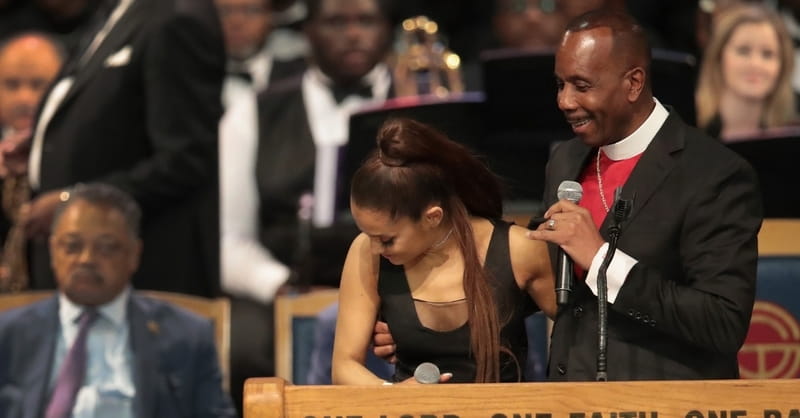 The Christian Post reports that Bishop Charles H. Ellis III has issued an apology after he was accused of inappropriately touching Ariana Grande during Aretha Franklin’s funeral service.

The service was recorded, and clips of the footage and photos of the moment went viral on social media.

Ellis greeted Grande on the Greater Grace Temple stage in Detroit after she finished her rendition of "(You Make Me Feel Like) A Natural Woman" during the Friday service. At this point Ellis wrapped his arm around the pop star with his hand positioned near her breast and it appears as if his fingers were pressing down. Based on Grande's facial expressions in the footage, many are speculating that she was clearly uncomfortable with what was happening.

In an interview with the Associated Press on Friday Ellis said, "It would never be my intention to touch any woman's breast ... I don't know I guess I put my arm around her.”

He continued, "Maybe I crossed the border, maybe I was too friendly or familiar but again, I apologize."

"The last thing I want to do is to be a distraction to this day. This is all about Aretha Franklin," he concluded.

Many fans, however, are not accepting this apology considering it to be half-baked.

One woman, Kelly Ellis, spoke out about this on twitter saying, "The most important requirement of an apology is accepting responsibility for what you did wrong, and owning up to it. This isn't an apology."

Others are also upset about a joke that Ellis told during the service about Grande’s last name. The bishop said when he saw Grande’s name on the program he thought it was a new item on the Taco Bell menu.

Ellis also addressed this in his apology saying, "I personally and sincerely apologize to Ariana and to her fans and to the whole Hispanic community."

He continued, "When you're doing a program for nine hours you try to keep it lively, you try to insert some jokes here and there."