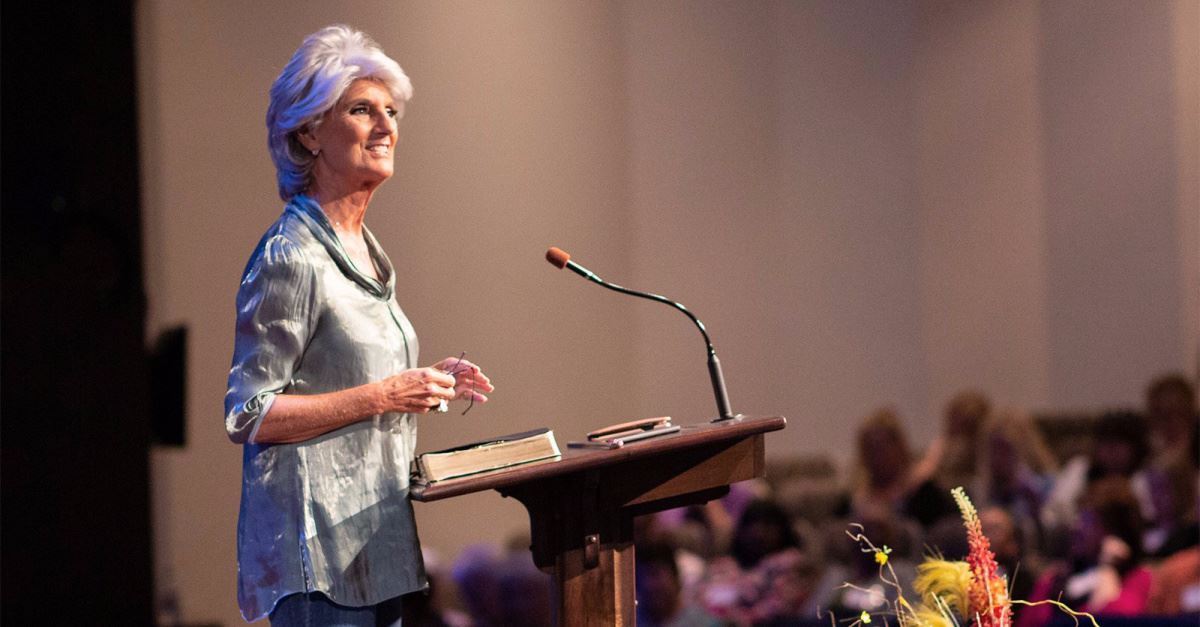 (RNS) — Anne Graham Lotz’s journey has been a tough one lately: A year ago, three years after the death of her husband and six months after the funeral of her famous evangelist father, she was diagnosed with breast cancer.

But the 71-year-old Bible teacher and daughter of Billy Graham says she has refused to give up hope and her faith remains a constant.

As she completes her cancer treatment this week, Lotz is free again to travel for public appearances — including a visit to the Billy Graham Library in Charlotte, North Carolina, on Oct. 3 — as she promotes her latest book, “Jesus in Me: Experiencing the Holy Spirit as a Constant Companion.”

Lotz, who belongs to a church affiliated with the Southern Baptist Convention but calls herself simply a “follower of Jesus,” talked to Religion News Service on Monday (Sept. 23) about facing cancer, being a widow and an orphan, and defining the Holy Spirit.

How are you doing, especially given your diagnosis of breast cancer last year?

I think I’m doing well. From what the doctor has said, there are no real markers for this kind of cancer. So I think they just finish the treatments and after five years, if I’m still clear, they consider it done with. I have my last infusion (Tuesday). So I’m very glad to get all that behind me. And I’ll just take one day at a time.

It’s been a rough year but I tell you what: The Lord has been so faithful. And I look back on this year and what stands out is not the pain and the suffering and all that. It’s the blessings of God. He has poured out his blessings to really balance and take the sting out of all of that. So I’m very grateful.

How has your faith helped you deal with these various aspects of your treatment?

God has given me promise after promise throughout this treatment. And I believe from the very beginning, when I first heard about it, I felt like he spoke to me from (the New Testament’s Letter of) James, Chapter 5, saying that I would be healed through the prayers of others: “Pray for one another that you would be healed.”

And so I put it out on social media, asking people to pray and I believed that if they did that I would be healed and people rallied. There were tens of thousands of people around the world who were praying for me and I believe God has heard and answered their prayers.

I know there’s a greater healing than physical healing and it’s the resurrection, so if I die and God takes me to heaven, I’m OK with that. But I feel like he has told me that I’m physically healed at this point.

You wrote that your diagnosis has prompted you to consider the many others who are suffering from cancer. Are you hoping your experience will expand your ministry?

It already has and it’s not my ministry that I want expanded. It’s reaching more people to let them know that if God was there for me all through this, he’ll be there for them. Sometimes when people have a diagnosis like mine, one of the first reactions is “God, why me?” They feel perhaps that God’s not blessing them because they’re not healthy, or that in some way God is punishing them or they’ve done something wrong. And I feel like one reason God allowed me to have this is to show them and to tell them that cancer is not punishment.

Why did you decide to dedicate your book on the Holy Spirit to the lonely?

Four years ago my husband went to heaven. I met him at 17. I married him at 18. He’d been the center of my life for 49 years. And then he’s gone. My family rallied around me. They were so precious. But still, there are times during the day when nobody’s around. When he was gone, I realized I’m the one then who will give counsel and wisdom and be the one that the family comes to. It’s not a burden, but it’s a very serious responsibility and so I felt alone in that sense.

When Daddy left, of course, and then I (was) faced with cancer, with this huge decision: Where do I go? But I had nobody, I didn’t have a husband to turn to, to talk to about it. I didn’t have a daddy to run to.

There’s a loneliness to being a widow and an orphan. Although the testimony in this book is that I’m not lonely, I feel like people like me could be lonely and I have a heart for them. But the Holy Spirit is God’s antidote to loneliness. Because I have not been alone, and I’ve experienced his constant companionship. But I’m not sure I would be as acutely aware of it if I’d had my husband and my father.

How would you sum up very briefly what or who you think the Holy Spirit is and is not?

The Holy Spirit is Jesus without skin, the invisible Jesus. He’s a distinct, separate person with his own mind, will and emotions, but just as Jesus exactly represents God the Father, the Holy Spirit exactly represents Jesus. But he’s invisible and he is available to come live within us when we come to Jesus by faith, confess our sins, ask him to forgive us, to come into our hearts. Jesus doesn’t come into us because he’s in a man’s body, living up in heaven, getting ready to come back and rule the world. But he comes in, he honors that invitation and gives us the Holy Spirit to live inside of us. So the Holy Spirit is Jesus in me, a separate person — I want to be clear about that — but he’s the invisible Jesus inside of me.

As you coped with cancer treatments, how have you dealt with the side effects, including the loss of your trademark shoulder length hair?

(Laughs) With a wig. I remember when the doctor told me I was gonna lose it and I just shrugged and said, “Hair will grow back.” All women understand that it’s a hard thing. And it was hard when I went to my hairstylist and he just had to shave me down. But he made it fun. We joked and laughed and then he had a wig that he put on me and, and that’s just the way it is. When I go to the hospital, there are women who are bald, women who are in scarves, women who have wigs, just sort of in a club and it’s OK. I’m looking forward to my hair coming back but, I’ll just be honest, it has come back so tight curly. Even my hairstylist can’t do anything with it. So when you see me, for right now I’m wearing a wig. That’s OK. It’s just a secondary thing.

You described traveling with your daughters on your first trip to the breast cancer center and praising God along the way. How have you found joy in the midst of your cancer journey and does it continue or is it hard to find sometimes?

No, it has continued. It’s never left me. And I think some of it has to do with perspective. If you go into this with your focus on the pain and the suffering and “Why me?” and “Where is God?” and all that kind of nonsense, then you just go down, down, down.

But if you go into it focused on God — I know it didn’t catch him by surprise. I know this wasn’t an accident. I know this is part of his purpose for my life. But now, Lord, how do you want to use it?

Every time I have gone over, there have been what I call those divine appointments, where you feel God has you there at just such a time to encourage somebody, to lift up somebody, to be a blessing to somebody. And I’ve been blessed. So they’re almost like little mission trips, like little ministry trips. You look at it, knowing that God is with you, that he has a purpose in this and looking for ways that I can reach out and can be a blessing and encouragement to somebody else.