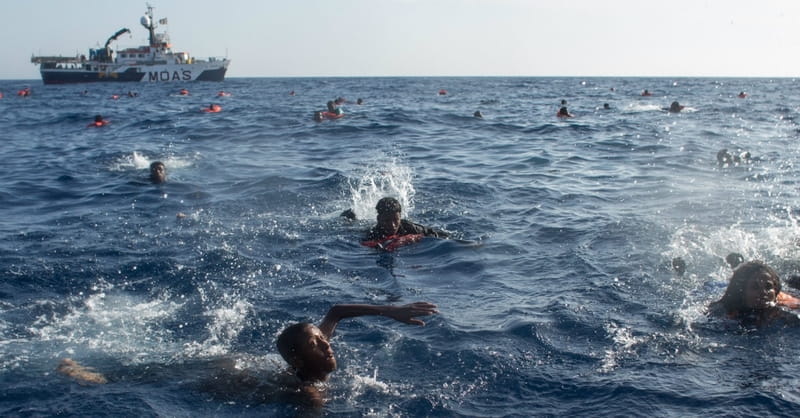 Thirty-four refugees have drowned after their boat capsized off the coast of Libya. Most of the casualties are reportedly children.

The nearly 200 refugees had been attempting to escape their war-torn country and reach Europe to start new lives when their boat capsized, roughly 20 miles off the Libyan coast. The refugees were dumped into the Mediterranean Sea.

Although rescue ships from Italy, as well as several commercial ships that were in the area, rushed to their aid, it was too late for 34 of the migrants.

“At least 20 dead bodies were spotted in the water," said Italian Coast Guard commander Cosimo Nicastro, according to NBC News.

Chris Catrambone, co-founder of Migrant Offshore Aid Station, added that, “Most are toddlers.”

Experts worry that more terrible accidents will occur as the weather is getting warmer and more refugees are sure to try the perilous journey. In fact, according to Relevant, an estimated 250,000 refugees are expected to attempt the voyage this year.

The statistics for survival on such a voyage are stark, however. Studies show that one out of every 39 refugees perish while making the voyage. Last year, more than 5,000 died, and this year, the number is already at 1,300.

Photo: Refugees and migrants are seen swimming and yelling for assitance from crewmembers from the Migrant Offshore Aid Station (MOAS) 'Phoenix' vessel after a wooden boat bound for Italy carrying more than 500 people capsized on May 24, 2017 off Lampedusa, Italy. The Migrant Offshore Aid Station (MOAS) 'Phoenix' vessel rescued 603 people after one of three wooden boats partially capsized leaving more than 30 people dead. Numbers of refugees and migrants attempting the dangerous central Mediterranean crossing from Libya to Italy has risen since the same time last year with more than 43,000 people recorded so far in 2017. In an attempt to slow the flow of migrants Italy recently signed a deal with Libya, Chad and Niger outlining a plan to increase border controls and add new reception centers in the African nations, which are key transit points for migrants heading to Italy. MOAS is a Malta based NGO dedicated to providing professional search-and-rescue assistance to refugees and migrants in distress at sea. Since the start of the year MOAS have rescued and assisted 3572 people and are currently patrolling and running rescue operations in international waters off the coast of Libya.