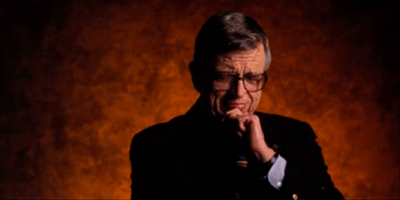 Chuck Colson, the Watergate figure and Nixon “hatchet man” whose prison term and dramatic conversion to Christianity led him to dedicate over 35 years of his life to prison ministry and evangelical leadership, died on Saturday. He was 80 years old.

Once known as Nixon's “dirty tricks” man, a cunning political operative whose ruthlessness earned him both respect and hatred in Washington, Colson made an about-face in 1973 with his conversion to Christianity. Although his “born-again” experience was met with doubt and skepticism at first, Colson ultimately proved his commitment to his new-found faith over the course of decades of work inside U.S. prisons and years of evangelical outreach throughout the world.

"I shudder to think of what I'd been if I had not gone to prison," he said in 1993. "Lying on the rotten floor of a cell, you know it's not prosperity or pleasure that's important, but the maturing of the soul.”

Colson pled guilty to obstruction of justice in 1974, and spent seven months in prison. It was his own experience of incarceration that prompted him to found Prison Fellowship in 1976. He was devastated by the hopelessness he saw in the lives of his fellow prisoners, and determined not to forget those he had met while behind bars. "You can't leave a person in a steel cage and expect something good to come out of him when he is released," he said in 2001.

Today, Prison Fellowship is the largest operating prison ministry in the world, reaching prisoners, ex-prisoners and their families in 113 countries. According to their website, Prison Fellowship “works with incarcerated men and women all over the U.S. and helps them prepare for release back into the community.” The group works inside prisons, where staff members mentor prisoners, and “help them develop the life skills, social skills, and parenting skills that will increase their chances of success on the outside.”

The group is known for its emphasis on prisoner after-care, helping former prisoners adapt to their new lives outside of prison. After an individual's release from prison, Prison Fellowship and its partners continue to assist former inmates through the often arduous transition to life outside prison bars.

The group says that newly released prisoners face a unique set of challenges, not to mention the stigma of being a former inmate – circumstances that Prison Fellowship says makes them “especially vulnerable to relapse.” The group says they respond to the unique challenges faced by ex-prisoners by “meeting both spiritual and practical needs to help ex-prisoners stay strong in their faith and successfully clear the reentry hurdles.”

Within the evangelical community, Colson will be best remembered not only for his prison ministry but for his efforts to promote a Christian worldview through the numerous books he authored, as well as through his daily radio commentary, BreakPoint. The radio program, which Colson launched in 1991, airs weekdays on 1,200 outlets, and reaches an estimated audience of 8 million. The program tackles issues related to Christian worldview, aiming to present a Biblical perspective on such topics as prison reform, abortion and the pro-life movement, marriage, human rights and faith-based ministry.

Colson was heavily influenced by the work of William Wilberforce, the British parliamentarian whose tireless efforts to abolish slavery in the 18th century resulted in the abolition of the slave trade in Britain well before the Civil War. Colson's own work to influence public policy was largely inspired by Wilberforce's efforts. He opposed the death penalty, and was vocal in his support of religious freedom and human rights, pushing for legislative reforms of the U.S. prison system, as well as advocating against human trafficking, and playing a significant role in the passage of the Sudan Peace Act.

For Senate Minority Leader Mitch McConnell (R- Kentucky), Colson's story represents "a constant and necessary reminder to those of us in and out of public office of the seductions of power and the rewards of service."  The senator was impacted by Colson's service to prisoners. "His famous redemption story and tireless advocacy on behalf of the marginalized and the outcast have called all of us to a deeper reflection on our lives and priorities," McConnell said. "He lives on as a modern model of redemption and a permanent rebuttal to the cynical claim that there are no second chances in life."

Prison Fellowship Ministries has dedicated a portion of their website to memories of Chuck Colson, providing an area where viewers can submit stories of the impact he has had on their lives. Since Colson's death on Saturday, submissions have been pouring in. “I feel like I've lost my mentor, even though I never met him,” one contributor wrote. “Through his books and BreakPoint, he offered so much good advise and counsel. He truly showed us how to live out our worldview. He will be deeply missed.”

Colson's work to influence culture with a Biblical worldview, combined with his efforts to promote social justice, unite Protestants and Catholics, and galvanize support for the most vulnerable in society, has become the legacy of the once cynical political operative.

Formerly recognized as the epitome of a dirty politician, Colson's legacy was ultimately one of compassion. And in his own words, that could never have happened if he hadn't faced the darkest time of his life, Watergate. In the mid-'90s, Colson said that God "used that experience to raise up a ministry that is reaching hundreds of thousands of people.” He was regretful of his own errors, but grateful for the humbling – and ultimately transforming – experience. "I'm probably one of the few guys around that's saying, 'I'm glad for Watergate,'” he said.